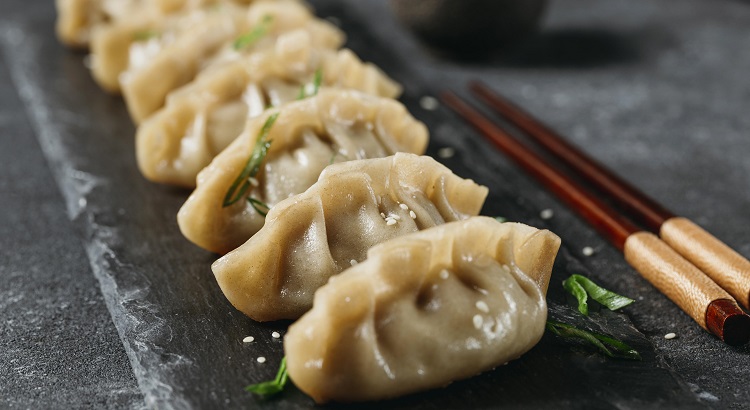 The Lunar New year is coming soon, and what better way to celebrate than the age-old tradition of making dumplings! Dumplings filled with pork and cabbage have long been eaten as a tradition for the Lunar New Year in many East Asian cultures. These tasty little pouches are served as a representation of financial wealth. Some say this is because they look like an ancient Chinese coin, others say dumplings look like little bags of money. Really it depends on how you fold your dumplings. The more dumplings you eat, the more wealth for the upcoming year. This recipe is a vegetable version, made with a classic plant-based filling of tofu, carrots, cabbage and shiitake mushrooms rather than pork. If you want to spice things up and get some probiotics in your meal, swap out the cabbage for kimchi. These would pair well with a salad topped with ginger dressing and a tuna steak.

Remove tofu from packaging and press the water out. Do this by placing the tofu on a cutting board with paper towels below and on top of it. Add a weight to the top, such as a heavy baking dish, to press water out of the tofu. Allow the tofu to sit with the weight for 5-10 minutes.

In a wok or large skillet over medium high heat, add 3 tablespoons of cooking oil and add the ginger. Cook for 30 seconds, until fragrant. Add the white onion and stir fry until translucent. Add the chopped mushrooms and stir fry for another 3-5 minutes, until the mushrooms are tender and any liquid released by the mushrooms has cooked off.

Add the garlic, cabbage and carrots and stir-fry for another 2 minutes, until the veggies are tender and all the liquid released has been cooked off.

In a separate bowl or plate, smash the tofu into a crumble using a wooden spoon or the back or a fork. Add this to the pan with the veggie mixture. Transfer the mixture to a large mixing bowl and allow to cool.

Fill the dumplings with 1 tablespoon of filling. To seal them, dip the tip of your index finger in water and wet half of the wrapper’s edge, like an envelope. Fold the wrapper in half and pinch the edges together. The wetness on the flour wrapper will act like a glue, closing the dumpling. You can stop here or then pinch the corners together.

To cook the dumplings, steam them or pan fry them. To steam, put the dumplings in a steamer lined with either a bamboo mat, cabbage leaf or cheese cloth, and steam for 15-20 minutes.

To pan fry, heat 2 tablespoons oil in a nonstick pan over medium high heat. Place the dumplings in the pan and allow to fry for 2 minutes. Pour a thin layer of water into the pan, cover and reduce heat to medium-low. Allow dumplings to steam until the water has evaporated. Remove the cover, increase heat to medium-high and allow to fry for a few more minutes, until the bottoms of the dumplings are golden brown and crisp. Makes 60 dumplings.