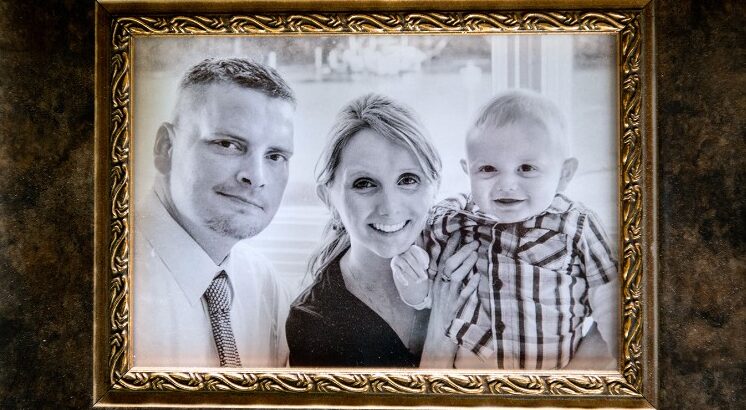 The 42-year-old was a kid at heart, the one who could always be found at gatherings, playing on the floor or out in the backyard with the kids. “He loved life until he got too sick,” remembers his wife, Kristin Austin.

After a 2012 hiatal hernia repair surgery failed, Casey had subsequent repair surgeries every year that led to scar tissue, nerve damage and other abdominal problems, Kristin says. For years, Casey lived with the pain and put on a brave face for friends and family. He loved being a dad to their 8-year-old son, Brayden, and continued to help others with what Kristin calls his “heart of gold.”

“Even on his worst days, he would still do everything he could to take care of me and Brayden, or help a neighbor, or do something thoughtful for my mom and dad,” she says.

But by summer 2019, Casey couldn’t hide the pain anymore. Researching palliative care services, he found Carroll Hospice’s palliative care nurse, Jenifer Garner, C.R.N.P. “She was amazing,” Kristin says. “She gave him a quality of life that he hadn’t had in years. She listened and she heard him. She provided a holistic level of care. She totally changed things for us.”

Though his quality of life improved, Casey began losing more weight throughout the fall. After doctors predicted he would only live a few weeks if nothing was done, Casey agreed to a feeding tube in December.

This spring, he began losing weight again, and Kristin says his cognition and temperament changed. “He was angry. He was sad,” she says. “He knew he was dying and that he was going to miss out on our son growing up.”

Casey had been resistant to hospice care in the past, but a phone call with Jenifer changed that, says Kristin. “She knew him,” Kristin says. “She knew what mattered to him, and it was having the best quality of life that he could in whatever time was left.”

Carroll Hospice gave the family more than they could have imagined. “Hospice put dignity back into Casey’s life—into all of our lives. Choosing hospice gave him control in a way he hadn’t had in a long time,” explains Kristin.

And hospice gave Kristin support she’d never experienced in all the years he’d been sick. “What a beautiful last gift to give me: people to care for me, cry with me and help me through some of the hardest days I have known,” she says.

The Austins utilized home hospice care for about a month until Casey required a higher level of care, and he was transferred to Dove House. “They were so compassionate,” Kristin says of the hospice staff. “They are born to do the jobs they do, from the techs to the nurses to the doctors. There were a couple who stood out, who treated him like he was their own family, and that was such a consolation.”

Casey died a little more than a week after entering Dove House. “He held on for longer than everyone thought he would,” says Kristin. “He died as he lived his life, fighting and wanting to play hard. He gave it his all.”

Kristin is thankful for the care the team gave to Casey and their family. “I can’t say enough good things about Carroll Hospice. I think it was the best decision we ever made,” she says. “They tend to every aspect of you, your spirit, your mind, your body… hospice changed everything for us.”

From the fall 2020 issue of DASH, Carroll Hospice’s community newsletter