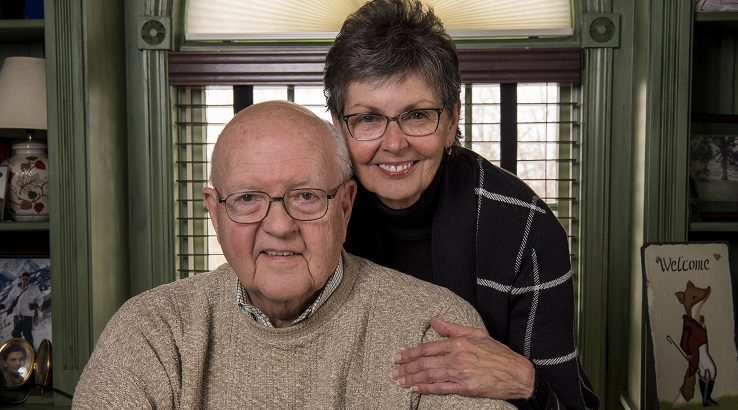 Lee and Louna Primm have turned to Carroll Hospice during some of the toughest times in their lives.

Through their support and volunteerism at Carroll Hospital, the couple was familiar with Carroll Hospice, and they experienced the loving support hospice provides when the team cared for several close family members.

After Lee’s 95-year-old mother Thelma sustained a minor injury in 2008, her systems started to shut down, and the Primms knew it was time for hospice care.

Thelma was transferred to Dove House, Carroll Hospice’s inpatient facility, and was there for less than two days before she died.

The experience was peaceful and respectful, says Louna. For Lee, the ability to be there for his mother, visit with her and say goodbye made all the difference. “It made it easy for my mother,” he says, “but it also made it easy on my family.”

Thelma, the oldest of 10 children, was a spiritual, happy woman who was devoted to the family, says Lee. Thelma’s youngest sibling was Lee’s aunt, Jessie. The Primms moved Jessie to Carroll Lutheran Village about 13 years ago, when she was living alone and facing significant health issues. In November 2017, her body wasn’t responding to medical care.

After being evaluated by hospice staff, Jessie entered into hospice care at Carroll Lutheran Village for several months until her death in February 2018 at the age of 88. “I was told by the hospice nurse that she was within hours of passing, so I was able to be there with her, and I was until the moment she died,” says Lee.

The Methodist church was an important part of Jessie’s life. “She knew, by heart, every hymn in the Methodist hymnal,” he remembers. Carroll Hospice and Carroll Lutheran Village staff knew how important music and the church were to Jessie, and they made sure to have music playing non-stop. “The music was on when she passed,” Lee remembers. He remembers his aunt as a religious woman who traveled extensively and loved to see new things. “Her signature was her eternal happiness,” says Lee. “There was never a down time for her.”

Shortly before Jessie died, Louna’s mother, Rose Rivera, also entered into hospice care at Carroll Lutheran Village. She’d been an independent living resident there for almost a decade before a fall caused her to become bedridden in 2016. Rose was experiencing a lot of pain in her back and her legs that was difficult to control. Not sure where to turn, Louna reached out to hospice and asked them to assess her mother.

In January 2018, Rose entered into hospice care. “There was always an open dialogue between the Carroll Hospice staff and the Carroll Lutheran staff,” Louna says. “I was told by the hospice nurse that she was within hours of passing, so I was able to be there with her, and I was until the moment she died.”

Hospice staff worked to adjust Rose’s medications to help with her pain, and she became peaceful and relieved. Shedied about six months after starting hospice care, two months shy of her 96th birthday.

Louna remembers her mother as a very intelligent, determined woman who came from an Italian immigrant family and put herself through the nursing program at Fordham University by working nights in a factory. Rose was a private, quiet lady who loved children. “As a daughter, there were never any limits placed on my brother, sister and I. We could be whatever we wanted to be, and that was pretty brave, but she had done it for herself,” Louna says.

With each loved one’s care, the hospice team provided information on her progress and education on the steps of the dying process to ensure the family was fully informed. “[Hospice is] comfort and care, that’s the biggest thing,” says Louna. “It’s a road map for the family, as well as the patient.”

Their experiences taught them the importance of getting into hospice care as early as possible. “It makes a big difference in those months if you have care early, both for the patient and the family,” says Lee.

He believes that denial could be one of the biggest reasons why people don’t reach out to hospice sooner. “I think they’re afraid that it’s an admission that the end is upon them,” Lee says. “But if you’re questioning [whether hospice care is needed], make that inquiry.”

From the Spring 2019 issue of DASH, Carroll Hospice’s newsletter.