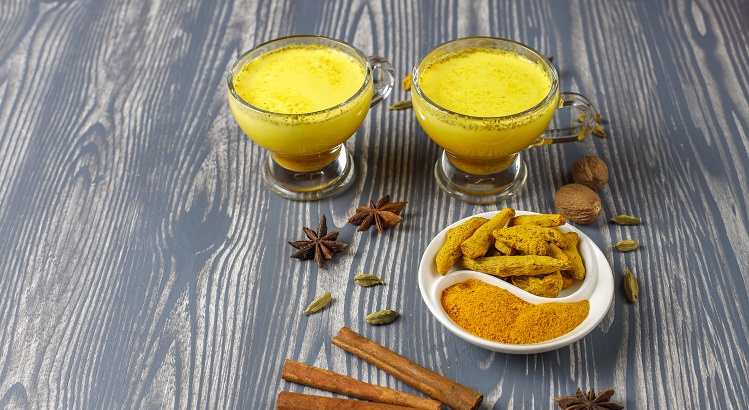 Turmeric has been gaining attention for its many health benefits, though it’s been used in Ayruvedic traditional medicine for thousands of years. As more research is done, curcumin, the main medicinal component in turmeric, looks to be a powerful antioxidant and anti-inflammatory agent.  It’s anti-inflammatory effects benefit a range of conditions such as metabolic syndrome, degenerative eye disorders, arthritis, hyperlipemia and chronic pain. It may even help reduce the swelling and soreness induced through exercise. One issue that has been found with curcumin is that is not easily absorbed into our bodies; however, a component in black pepper helps increase that absorption. This recipe features both and is perfect for cozying up in your favorite blanket on a cold night.

To a small saucepan, add coconut milk, milk, turmeric, ginger, cinnamon, black pepper and your sweetener of choice. Whisk to combine and warm over medium heat. Heat until hot to the touch but not boiling – about 4 minutes – whisking frequently.

Serve immediately, dividing between two glasses and leaving the cinnamon stick behind. Best when fresh, though leftovers can be stored covered in the refrigerator for 2-3 days. Reheat on the stovetop or microwave until hot. Makes 2 servings.