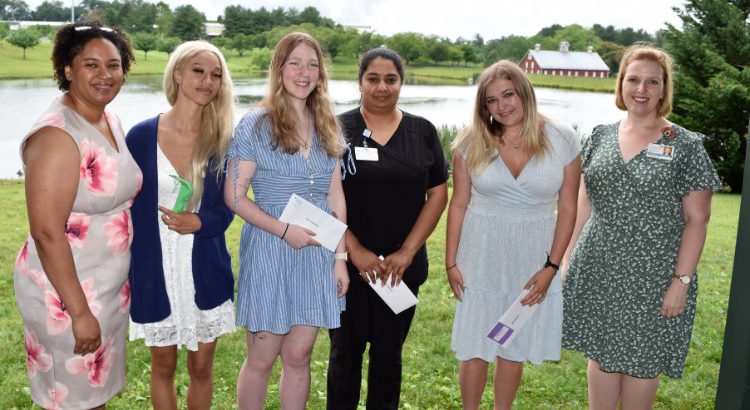 When Joy Goodie decided to change her career from being a behavioral health consultant in Carroll Hospital’s Emergency Department (ED) to a registered nurse and ideally an advanced nurse practitioner, she wanted to avoid accumulating a huge debt when she graduated.

She enrolled in Notre Dame of Maryland University School of Nursing in Baltimore and is looking forward to graduating with a Bachelor of Science in nursing next August. Now she has received help in offsetting the cost of some of her tuition thanks to receiving two scholarships from the Carroll Hospital Foundation.

“I’m super excited to receive these scholarships. I started nursing school in an accelerated program and it’s extremely expensive, so to not be overburdened with loans and to have the opportunity and the support of the organization where I work is just amazing,” says Goodie.

Goodie was one of 9 local students to be awarded a scholarship by the Carroll Hospital Foundation to assist her and others in advancing their education. The Foundation awarded $21,500 in scholarships during a special presentation on June 22.

The scholarships and recipients were as follows:

“We are honored to offer these scholarships to such deserving students,” said Brenda Frazier, vice president of development at Carroll Hospital. “We welcome any opportunity to support others in pursuing higher education and ultimately helping to bring about positive changes in the community.”